So, Great Grandpa was a Farmer - Land Records - Part One

I come from a long line of farmers. During the nineteenth century, most branches of my family tree made their living in agriculture. This is good news, because being successful in farming, meant owning land. And owning land meant a paper trail of information left for descendents.

If your ancestor bought land from the federal government in the Eastern Public Lands States between 1820 and 1908, than you can use theBureau of Land Management’s website to view the actual land patent used to transfer ownership from the US Government to your ancestor.

What states are included in the Eastern Public Lands States?

In addition, the Bureau of Land Management is slowly adding the land patent images for the seventeen Western Public Land States.

The Western Public Land States are:

What information will you find searching the land Patent records? 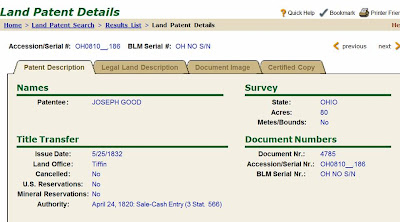 As you can see from the image above, the Patent Description gives you the following information for a parcel of land purchased by my GGG Grandfather, Joseph Good.

Below is the description of the land that Joseph purchased.

Believe it or not, those seemingly undecipherable notations will tell me exactly where Joseph’s land is located.

The easiest way, is to find a Plat Map in the county where the land is located. It doesn’t matter what year the plat map was produced, the numbering of the township and range will remain the same. (However, in counties such as Gallia County of Ohio where the boundaries have changed, you might find the land listed in another county depending what year the land was purchased and what year the Plat map was produced.) Look for the range and township number to match. In this case, I would look in Seneca County for Township 3-N in Range 14-E.

However, if you know how to read it, the information taken from the land description will tell you precisely where great grandpa’s land was located. Public lands used the rectangular survey system, which utilized principle meridians and base latitudinal lines as their basis. .

Below is a Map taken from page 47 of The Auditor of the State of Ohio’s Publication, “The Official Ohio Lands Book.” It illustrates how the rectangular survey system worked. 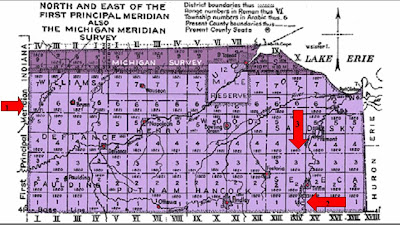 1. Meridian - 1st PM
Refers to the first Meridian which is the Ohio/Indiana Line
Base Line – In Northwest Ohio, the base line is the 41st parallel of north latitude.
2. Range: 14-E
This tells you that the land is located 14 ranges east from the 1st Principal Meridian. This takes you into Ohio. (Anything with an E designation would be in Ohio. Anything with a W designation would be located in Indiana.)
3. Township 3-N
The 3-N tells us that the land is located in the third township north of this baseline, in Range 14. This township happens to be Liberty Township, in Seneca County. Township 4-N in that same range, for example, would be Ballville Township in Sandusky County.
Townships are divided into 36 sections with 640 acres in each section. Below you can see the numbering system used. Notice section 8 and section 5 would are adjoining sections. 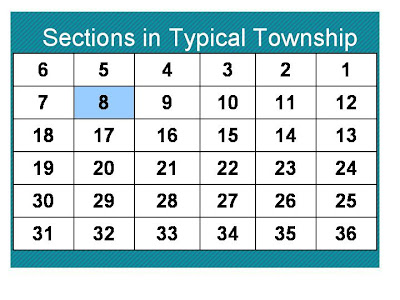 In this instance, Joseph had purchased 80 acres. The location of the acreage is described as E ½ NE. You can see the section pictured below. 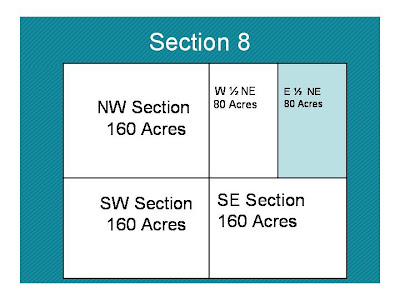 DOCUMENT IMAGE
And finally, there is the land patent document itself. You have your choice of viewing it in four different formats – small GIF, large GIF, TIFF, and as PDF file. The website says the PDF file is the best for printing. Below is an example of my small GIF file. 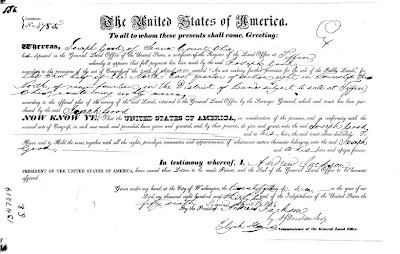 Notice the Certificate No. 4785 in the upper left hand corner matches the patent number on the Patent Description. This number is important if you decide to order a land entry file from the National Archives. 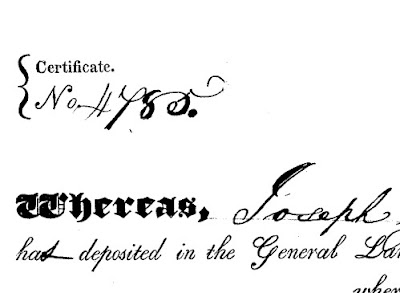 My next post will discuss doing just that.
Until Next Time…

Me – The Poster Child for ole Abe Maslow’s Theories

I have been anxious the last six months as I realized that my job, like that of millions of others, was in serious jeopardy. As the economy shriveled up like a stale French fry wedged in the seat cushion of a sixteen year old’s jalopy, my anxiety arose in direct and opposite proportion.


I believe I may have lamented in previous posts, that I alas, do not have in my repertoire, the normal feminine ingrained ability to handle several things at the same time, especially when I am under stress. (A notable genetic mutation, I’m sure.)


My point is, that during the last six months I have found it difficult to concentrate on enjoyable or challenging pursuits such as writing and genealogy. Two weeks ago, my anxiety reached its off key crescendo, when I finally got the word, that our client, whose account I have worked on for over five years, had fired us, leaving yours truly, without work.


Now you would think that the six months of anticipation of this very event would have been enough to cushion the blow, and that the shoe finally dropping would be somewhat of a relief, but you would be wrong.


The first week I sat staring blankly at the walls. I vaguely remember visions of “bag lady living” dancing through my head, and I’m sure there was some masochistic inventory taking, but mostly there was catatonic staring.


Before anyone sends over the cuckoo squad, I did eventually move past that stage, and into a more action-oriented phase, which after a few days of researching my options, made me twice as depressed.


Let me just say, it sucks to be out of a job no matter what your age, but if you happen to be over a certain age, it sucks doubly. If you doubt me, go ahead and look up the statistics.


Or better yet, if you want to really fall into a pit of depression, go ahead and read the advice on getting another job, if you happen to be over the age of, let's say, fifty. Whatever you do, don’t admit how old you really are or how much experience you really have, because employers DON’T WANT IT, according to the so called experts. As I said, it sucks. (Whatever happened to people honoring the wisdom that comes with age? Don’t answer – it’s a rhetorical question.)


Fortunately, after two weeks of limbo, the boss called with some project work that should keep me busy until the beginning of September. (I’m putting a note on my calendar to get the worry beads out come the first of August.) It’s not the same as having my own client, but I’m not complaining.


I also did some research on a couple of companies that I think our company should take on as clients, and my boss has already made preliminary contact with one of these companies. (And bless my boss, she was excited as I was at the potential.)


So I’m not sure what this means for my writing and my genealogy research. As Maslow’s theory pointed out, if a person’s lower needs aren’t met, they can’t move on to the higher need of self-actualization.


The point of this post is to inform any readers who are still hanging around, what was going on in here in TerryWorld, and the reason behind my continued absence.


I also wanted to ask each of you to show a little patience, a little kindness and some respect for your fellow man. It’s a tough world out there, people, and we need to understand that for some, it isn’t business as usual. You don’t have to be the solution for someone else’s problems, but you sure as heck don’t have to be the source of new problems either.


Note: For anyone who didn’t have to suffer through Psych 101 (or Marketing 101), you can read more about Maslow’s Hierarchy of Needs, here. The pyramid graphic should give you the gist of it.
Posted by TERRY SNYDER at 3:26 AM 12 comments: 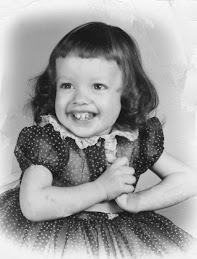